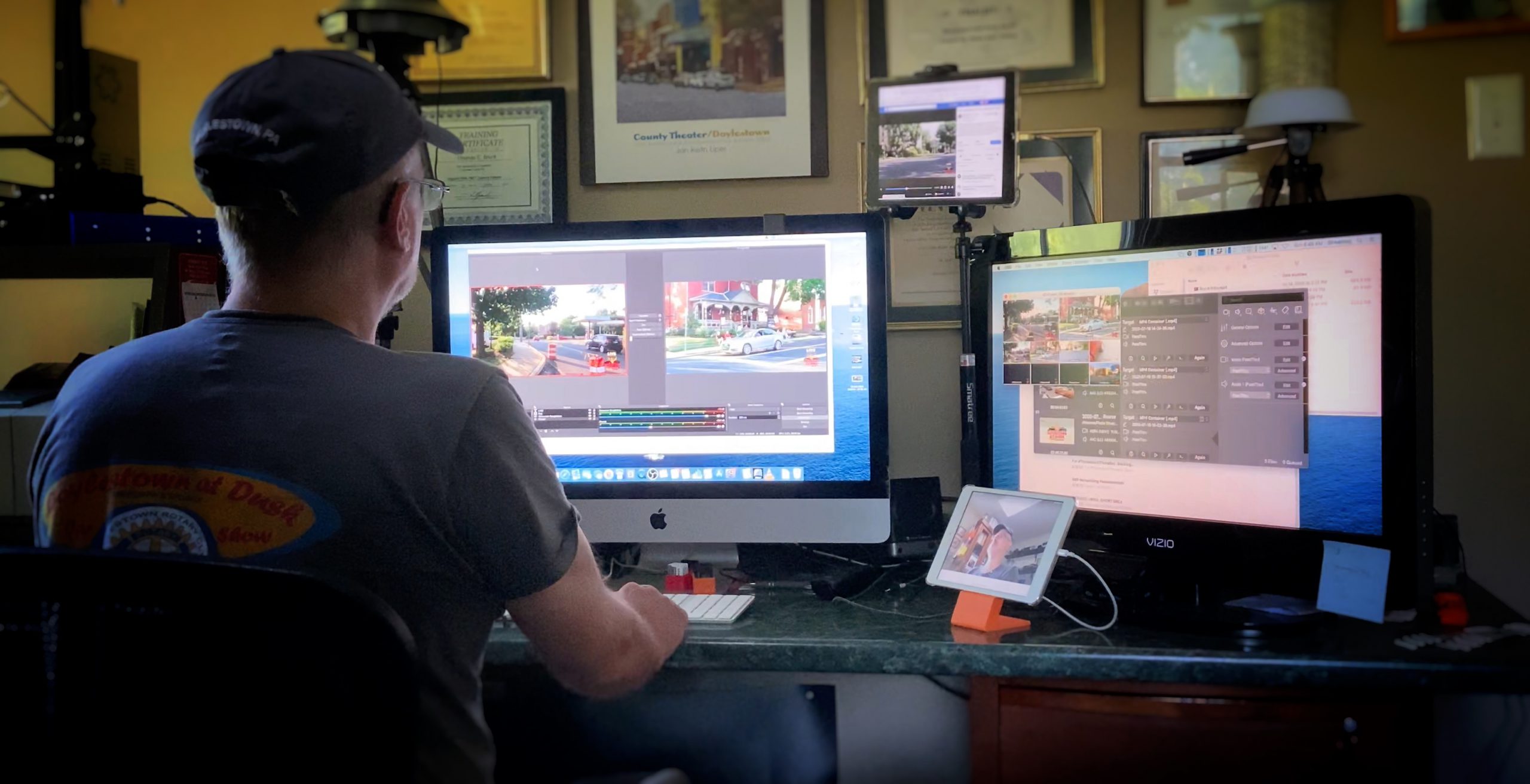 Every July, The Doylestown at Dusk Car Show is one of the area’s biggest car show events, due to its uniqueness. Several of downtown Doylestown, PA’s streets are closed, and 500+ classic cars are placed for a crowd of thousands to peruse on a late weekend afternoon. There’s even a stage with live music, and an awards ceremony at the end.

In this strange year of a worldwide pandemic, there was no way a show like this could happen this way this year. As many other events have had to do, it was either cancel, or take the show online somehow.

The show organizers decided to try a “hybrid” presentation. The plan was to have cars drive through the streets, interspersed among regular traffic, and fans could watch live on Facebook. This presented lots of interesting challenges. How do you properly cover something like this, and make it interesting enough to watch? Also, this was a charity event run by all volunteers, therefore, no budget.

This would be interesting. First thing was that we couldn’t do this with just one camera. The solution? A free App for Android and iPhone. Larix Broadcaster creates an RTSP (Real Time Streaming Protocol) stream from the phone camera and mic, and send it to my Mac Mini server running an RTSP Server (Local RTMP), also free. I could now receive multiple “camera feeds” from around the car route, as long as there was decent cell service. So we can get camera feeds back to a central point—now what to do next?

OBS to the rescue. For being free open source software, OBS is incredibly robust, and used frequently in the live streaming world. Like a production switcher, OBS handled everything. I could mix the live feeds with pre recorded segments, commercials, even live insert graphics. Having all my “scenes” prepared ahead of time was the best way to ensure a smooth show.

I now have “cameras,” and a way to mix these sources into a live stream. But how will I communicate to the cameras? One of the Car Show Committee members suggested using a Google Meet Room. This was brilliant. Each “camera crew” would use two phones—one as the camera, one connected to a Google Meet Room as an “intercom.” This plan was really taking shape!

The show would be switched from TebWeb’s nearby home office, dubbed “The War Room.” Having Verizon FiOS 1GB internet made for plenty of bandwidth to host the stream AND receive the multiple “camera” streams.

The day of the show, I went to the crew meeting point to go over route assignments, make sure mobile apps were properly configured, and meet our announcers. The announcers, brothers, would commentate from their home, using another Google Meet room. There would also be an “on the street reporter,” using his phone and the same Google Meet room. This way, announcers could also hear each other. Then it was time to head back to “The War Room.” Luckily, not too far away.

It was a very tense moment as I sat down at the iMac back in “the war room.” Will this work? My heart pounding as I waited for my camera operators to sign into the Google Meet Room and start their streams.One by one, I begin seeing images from across town. This is actually going to work!

We’re live on Facebook! The show started out with several minutes of pre recorded segments to introduce the show. Then it was time to start mixing in the live feeds and announcers.

Everything started working! I used a separate iPad mini sitting next to me open to “the Intercom Room.” A second Google account gave me “the Announcer room,” and I could port the audio into OBS using a Sound Siphon plug-in. I discovered that when I talked on the Announcer Room, that my voice was not heard on the stream! Perfect, now I can feel free to give them cues. The show proceeded nicely. It wasn’t without some rough spots: occasional frozen feed, announcer miscue or occasional dropout from a weak cell signal, but the concept and workflow, as crazy as it was to attempt—-all worked! We pulled off a viable live, multi camera, multi location production—with mobile devices and open source software.

I have over 30 years of a video production career, working everything from small events at a local cable studio, to major events like Super Bowls and Olympics, and lots of things in between. This was a great project to do, as it was challenging and pushed the limits of what can be done with open source software, some ingenuity, and dedicated volunteers.

Feel free to contact TebWeb for more details on the methods, or how I can help you use similar techniques for your own event. Below is a brief highlight compilation of the end result, along with a reference links to the software used.